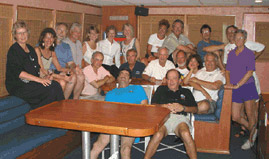 ISMA teamed up with Peter Hughes for a 7- day diving adventure in Belize, one of the smallest countries in Central America. Despite its size, the country offers a wealth of opportunities for underwater exploration.
Our divers were treated to the best walls, reefs, and atolls of Belize on the M/V Sun Dancer II, a luxurious liveabord vessel that was oncehome to ISAM divers in Palau. Now sttled in its new permanent home in Belize, the M/V Sun Dancer II did not sisappoint. With top-notch accomodations and a helpful and knowledgeable crew, the ISAM group enjoyed time on the boat nearly as much as that spent in the water beneath it.

Belize has the longest barrier reef in the hemisphere, which is known scientifically as the longest and most speies-diversified coral reef in the entire Caribbean (second in the world after the Australian Great Barrier Reef ).

Thirty miles offshore, three incredible atolls provided our group with some truly incredible diving. True coral atolls are not uncommon in the South Pacific, but they’re rare on this side of the globe. Lighthouse Reef, the most famous of the atolls, is the location of the Blue Hole and the magnificent nature preserve at Half Moon Cay.

Next fall will find our group in Ball , Indonesia for another incredible dive journey. We hope you’ll join us again