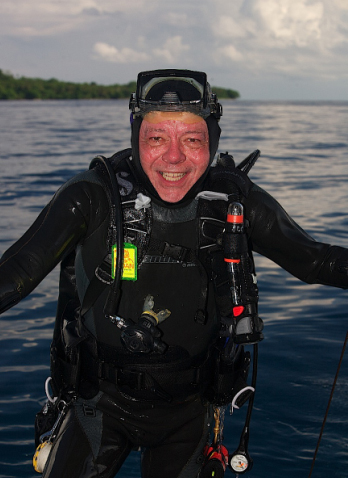 He was a Major in the United States Army in Frankfurt, Germany from 1973 to 1976 serving as a staff orthopedic surgeon before going into   private practice in Phoenix, Arizona as a pioneering arthroscopic orthopedic surgeon specializing in sports medicine, with particular emphasis on knee and shoulder problems.

During his career he was a member and/or officer of over twenty medical organizations, including the American Academy of Orthopaedic Surgeons and the American  Orthopaedic Society of Sports Medicine, as well as many other associations, boards and societies.  He served as chairman of the orthopedic committee at St. Luke’s Medical Center from 1979 to 1983. He also taught internationally and was involved in many worthy charities.

Dr. Campbell was an avid world traveler, historian, skier, scuba diver, and an outstanding underwater photographer.  He was the long-standing President of the International Society of Aquatic Medicine (ISAM), an educational organization that fosters the advancement of underwater medicine.

He is survived by three sisters, Susan C. Roper (Mickey), Cape Girardeau, MO, Sally Weisser, Fort Collins, CO, and Sandy Campbell, Estes Park, CO, five nieces, one nephew and numerous grand nieces and nephews. He is also survived by special friends who were like family to him and who will miss him dearly.

In lieu of flowers, memorial contributions can be made  to  ISAM/Edward D. Campbell, Jr. Memorial Fund, proceeds of which will be used to help further the art of underwater photography which he loved so much and other charitable purposes.  ISAM — 6240 Turtle Hall Drive, Wilmington, NC 28409.

There will be a memorial service celebrating his life May 6th at 2:30pm at the Paradise Valley Country Club,  7101 N Tatum Blvd.,
Paradise Valley, Arizona.